Hello! And welcome back to another very exciting episode of The Bachelorette. I’m calling this episode “very exciting” because this is the episode where Becca will either take someone to the fantasy suite or be so repulsed by someone that she sends him home early. Riveting stuff!

The episode begins, and we’re immediately treated to footage of the journey so far. Becca starts talking about all the men she has left and I’m realizing that she traveled halfway around the world to bang three guys she could have easily swiped right on drunk at a happy hour in Minnesota. Like, none of these guys warrant a romantic trip to Thailand. There’s more personality in a stock photo shoot then what’s happening on my screen rn. 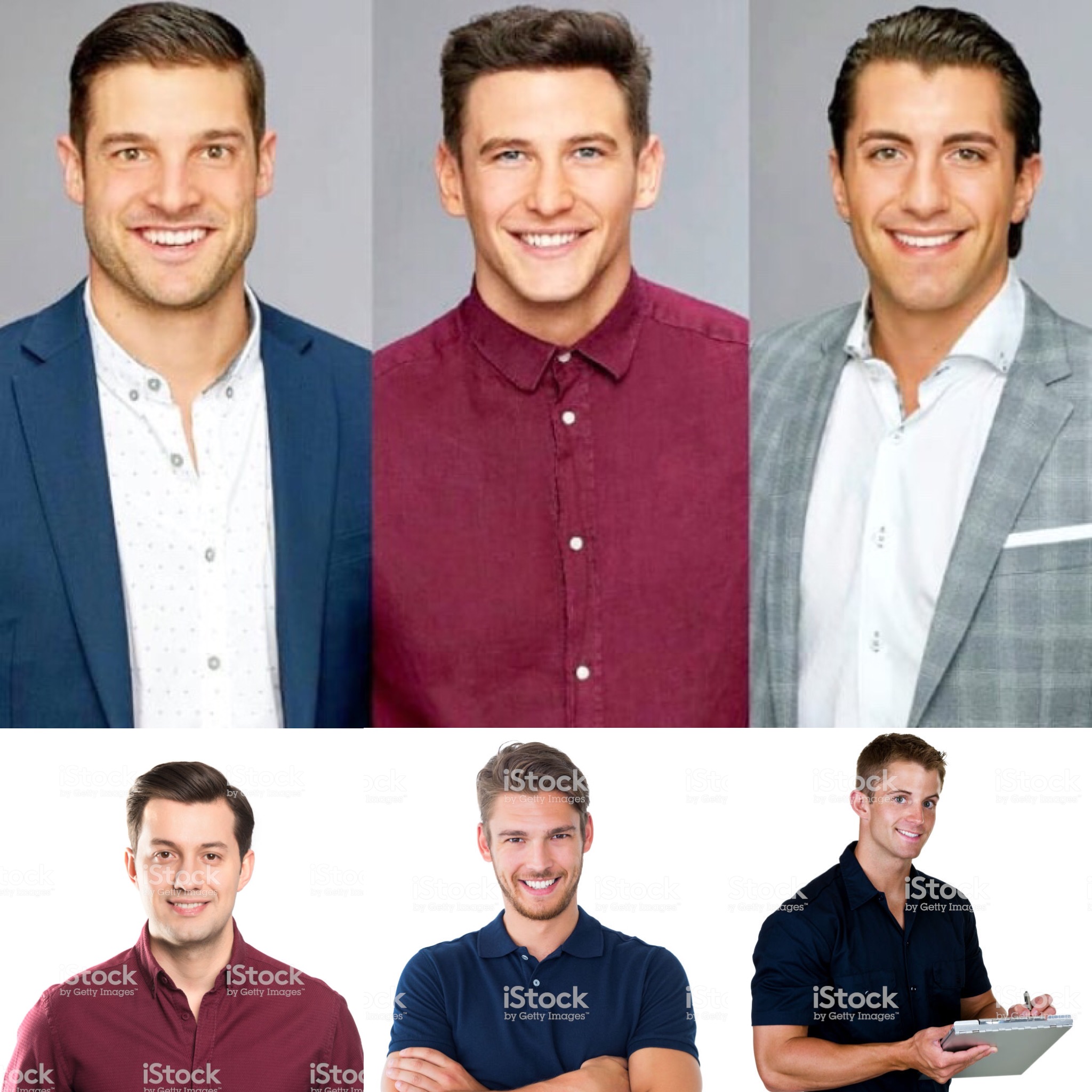 Seriously, which is which I CANNOT TELL!!

Blake gets the first one-on-one date and I already know this will end with him crying after sex. He’s got the face for it. I can feel it with every fiber of my being.

Becca kicks things off by forcing Blake to hike with her through a sacred temple grounds. She’s like, “this will be really fun because we won’t be allowed to touch each other at all!” Tbh that’s sounds like my perfect date so I approve of this.

Oh OF COURSE they run into two wise monks who proceed to lecture them on the secret to a happy life. Somehow I’m thinking that secret doesn’t involve dating 30 men on national television and hoping for the best?

Okay, so I know I’ve been going easy on Becca’s outfits these last few weeks and that’s because I’m genuinely worried Cary Fetman added an entry about me in his personal burn book, but I can’t hold back any longer. BECCA, WHAT IN GOD’S NAME ARE YOU WEARING?! It looks like she bought that dress at the airport gift shop, and I’m horrified. This is fantasy suite night and you came dressed for the occasion in a Wet Seal beach cover-up? What is wrong with you???

They start talking about their past relationships, and Blake is trying wayyy too hard to downplay his mental breakdown after his last girlfriend.

BLAKE: It was very hard time for me and my mother definitely did not have to hold me through the night for the next 3-6 months.
ME:

Godddd Blake is so needy. He’s like “I can’t ignore the fact that you’re dating other people” and it’s like, you have seen this show before, yes?

Blake and Becca head to the fantasy suite which looks weirdly like the best Marriott in Thailand. Seriously, ABC what’s happening with your budget these days? Thailand is crazy cheap and instead of living like kings for the night they’re living like two people on a mediocre business trip whose points landed them a free room.

Becca keeps looking at Blake like he considers gently cradling her face as foreplay. Good luck with that, girl!

Cut to the morning after and the camera pans to Becca’s 99 cent dress on the floor. As if I needed a graphic reminder about what went down in that room last night: some very heavy breathing and Blake prematurely ejaculating after accidentally brushing Becca’s thigh. Please.

Lololol Blake is acting like every girl who got drunk off of too much rosé and is trying to define the relationship as the guy she’s seeing starts putting on his pants and calling an Uber.

BECCA: That was a amazing.
BLAKE: So, like, what are we tho?

Wait. Blake is me. I am Blake.

Moving on to Jason’s one-on-one. Jason looks far too comfortable in Thailand. Like, he’s definitely made a pact before that what happens in Thailand stays in Thailand on a business trip. Ya feel me?

That smirk says it all.

Also, did Becca get her period on this date? Why is she wearing that towel around her waist? Because I know for goddamn sure it’s not for fashion purposes.

I can show you the world…#chiangmai #thailand 🌹

Okay, WHY is everything about food with Jason? First with the wing eating contest and now these crickets? It’s like he wants Becca to have violent diarrhea after every date.

Becca makes a p vague comment about her and Jason’s future together and then immediately freaks out over said comment. I’ve never related to Becca more than in this moment. She’s like “I don’t know what’s wrong with me but I don’t see a future with this person I met four weeks ago!!” Yes, Becca, this is good. That’s the ABC brainwashing slowly starting to leave your system. That, or blind panic at the start of a bowel movement. Either/or.

Wait so we don’t even get to see the day date at all? Damnnn Jason must have really f*cked up if all we get to see is her walking off with her producer.

Cut to the evening portion of the date. WAIT. Is Becca going to dump him right this second? Figures that she’s going to cut the night short on the night where I’m not immediately horrified by her dress.

Becca dips out on Jason AGAIN and he’s gotta know he’s going home tonight, right? Also, is it wrong that now that I know he’s a loser I’m kinda into him?

So when someone gets up two times to go cry by themselves on a date, they’re probs not into you…. noted #theBachelorette

Okay, this conversation is so effing awkward. Like, what does she want him to do? List reasons for why she should keep him? Like, they are talking in circles around each other.

BECCA: I’m not confident about you.
JASON: That feels like a yes, though?

Okay, Jason is pushing HARD to stay the night. He must think his penis can convince her to keep him around for another week. Is that considered big dick energy?

Jason finally gets in the van and is just like “eh, better luck next time.” Seriously? After all of that begging and pleading that’s all you have to say for yourself? Meanwhile, Becca has a small mental breakdown in her suite at the Marriott. If only she could see his monotoned goodbye speech rn.

Last and certainly most racist, we have Garrett’s one-on-one! Cut to Becca who’s pregaming the date by crying alone in her hotel suite. Again, I can deeply relate to this sentiment. At least the cameras didn’t zoom in on her lonely dress on the floor. What a missed opportunity, ABC!

BECCA THREE MINUTES INTO THIS DATE: I didn’t think, like, the locals would actually be here though?

I love how much they’re struggling with this crowd rn. These people could give one single sh*t that Bachelor contestants are in their presence. Can I just move to this beautiful, pure community?

Moving on. Becca shows up to the dinner and drinks portion of the evening wearing her grandmother’s Elvis costume. I’m not exaggerating when I say that I’m feeling personally attacked by Cary Fetman. This lace abomination has to be some declaration of war. Has to be. IT HAS A SATIN GODDAMN COLLAR. WHY. Becca does realize the end goal here is to make Garrett want to bang her, right? ‘Cause I’m worried that won’t happen now.

I love that Garrett is like “I’m nervous about commitment” and Becca practically orgasms on that pillow. Meanwhile, Jason, a guy who has exclaimed he loves her for weeks now, gets sent packing. Makes sense.

Wait, is that a freaking tent they’re spending the night in? Everyone else got the best sub-par hotel suite ABC’s points could buy them and these two are relegated to sleeping in the hotel’s backyard? If I were Garrett rn I’d be like “I signed up for Fantasy Suites, not glamping.”

HAHAHAHAHAHA. Oh my god Becca just blew a kiss to Garrett and his responding kiss was a mix between giving her the finger and rolling his eyes. This is the most personality I’ve seen from him all season, and I’m here for it.

GUYS. JASON. IS. BACK. Omgomgomgomgomg. Just when I was getting genuinely concerned that ABC was going to waste my time for the next 35 minutes the producers somehow coerce Jason into embarrassing himself further on national television. *turns up volume*

JASON: I just want to get some closure so I’m going to knock on her door and talk to her.
BECCA:

Wait what is this story he just gave her? Please tell me it’s not a scrapbook of their time together. Like, did he whip this up in his hotel room last night when the producers told him he needed to have a more emotional exit if he wants to be the next Bachelor? ‘Cause that’s the only explanation behind this sad, handwritten book he just deposited at her doorstep.

Okay, but why is there even a rose ceremony at this point? The anxiety rolling off Blake rn is making me sweat out all the wine I just drank and it’s senseless.

Becca shows up to the rose ceremony in yet another lace dress that makes me question. Chris Harrison asks Becca if she feels good about cutting Jason before the rose ceremony and she’s like “oh yeah, I have two great guys left and plus his hair repulsed me!” I paraphrase. 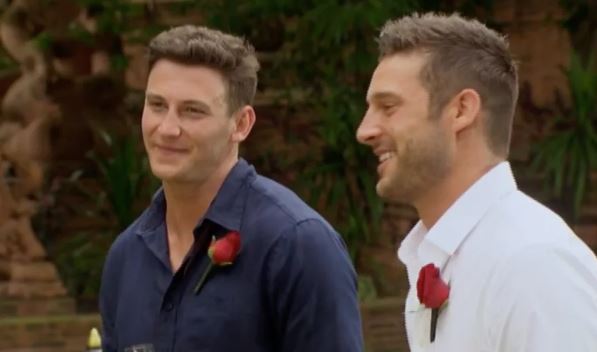 Becca calls Garrett’s name first and Blake looks like he might murder them both in their sleep. I hope his mother is on call to help him through these dark times.

LOL this toast is so effing awkward. Garrett’s like “thanks for giving me that quality one-on-one time this week.”

Next week we have “The Men Tell All” where I’m sure no one will take accountability for their actions or give us any insight into their dumbass decisions this season. Can’t wait!