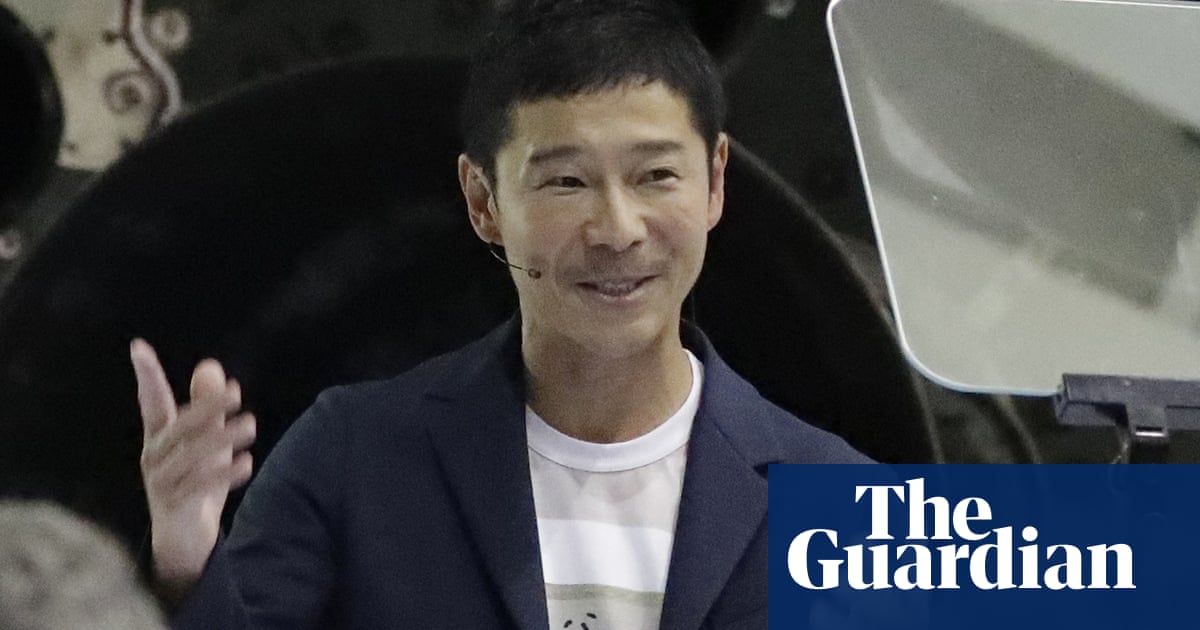 Elon Musk plans to launch the Japanese billionaire Yusaku Maezawa on a rocket around the moon, the embattled SpaceX CEO has announced.

Maezawa, a 42-year-old art collector and entrepreneur who founded Zozo, Japans largest online fashion retailer, could be the first private passenger to make the trip around the moon. The Big Falcon Rocket (BFR) has not yet been built.

This is my lifelong dream, Maezawa said in a speech on Monday, announcing that he would be inviting artists to join him on his 2023 trip. I choose to go to the moon.

Before he introduced Maezawa, Musk outlined his companys space travel goals, warning of a possible event that could end civilization, adding: We should take action and become a multi-planet civilization as soon as possible.

The announcement comes at a turbulent time for Musk, who has been embroiled in a string of scandals in recent months stemming from his unusual tweets and erratic behavior.

The Tesla CEO has repeatedly launched online attacks against a British diver who helped rescue children from a cave in Thailand, accusing him of being a child rapist and pedo. The diver, Vernon Unsworth, filed a defamation lawsuit against Musk on Monday, seeking at least $75,000 (57,000) in damages while also launching cases in the English and Welsh courts.

Last year, Musk unveiled plans for the new spacecraft that he said would allow SpaceX to build a base on the moon, colonise Mars, and enable commercial travel to anywhere on Earth in under one hour. He previously targeted the first launch for 2022, saying he would send a crewed flight to Mars by 2024.

At Tesla, his electric car company, he has struggled with production targets, leading to delayed customer deliveries.

Musk called the trip a dangerous mission and said he could not promise SpaceX would make the 2023 deadline: Were definitely not sure.

Maezawa has assumed the mantle of Japans most colourful business leader from Takafumi Horie, the internet tycoon who fell foul of Japans financial authorities a decade ago.

As chief executive of Zozo, Maezawa has amassed a personal fortune estimated at $3bn, making him the countrys 18th richest person, according to Forbes.

He is an unconventional addition to Japans often drab business world and has expressed a dislike for competing with others. He once said people should only work three days a week a controversial statement in workaholic Japan.

He recently added to the pressure on Japans fashion retailers with the launch of a made-to-measure garment service using a bodysuit called the Zozosuit.

By photographing themselves wearing the skintight polka-dot suit, users can upload their body measurements to ensure the clothes they order fit perfectly. The diminutive Maezawa said he came up with the idea because as a young man he struggled to find suits that fit him.

He formed Start Today, which runs his online mall, in 1998 while he was still playing drums in Switch Style, a band he had formed with classmates at high school. The company was listed on the Tokyo stock exchange in 2007.

A celebrated collector of Japanese and overseas art, Maezawa caused a stir last year when he paid $110m for an untitled 1982 work by the American artist Jean-Michel Basquiat.

He has demonstrated a philanthropic side, founding the Tokyo-based Contemporary Art Foundation in 2012 to support up-and-coming artists. On Monday, he said planned to invite between six and eight artists, including painters, sculptors, photographers, musicians, film directors, fashion designers and architects, on the lunar flyby.

I would like to invite six to eight artists from around the world to join me on this mission to the Moon, Maezawa said. They will be asked to create something after they return to Earth. These masterpieces will inspire the dreamer within all of us.

If you should hear from me, please say yes and accept my invitation. Please dont say no!

He stepped forward, Musk said of the billionaire. We are honoured that he chose us.

That Maezawa was the first to sign up should come as no surprise given his expensive taste in travel. He is the owner of a Bugatti Chiron sports car, and last month said he had commissioned the luxury label Herms to design the interior of his new private jet.

Musk has consistently attracted publicity for his space stunts and ambitious promises, with some critics calling the launch of a sports car toward Mars a major advertising feat for Tesla. Musk and SpaceX engineers had built a small submarine to assist Thailand with the cave rescue, but authorities did not use the device during the successful mission to save 12 young footballers and their coach, and Unsworth called it a PR stunt.

As the pedo controversy snowballed, Musk attracted further negative headlines by smoking marijuana live on a web show. When questioned about his actions, he told the Guardian by email: Guardian is the most insufferable newspaper on planet Earth.

Tesla shares crashed 6% after he did the show, which came amid the resignation of two senior executives.

Musk is also facing an investigation by the Securities and Exchange Commission (SEC), prompted by his tweet saying he had secured funding to take Tesla private, sparking backlash from investors. The company has further been plagued by labour complaints, high-profile collisions while in autopilot mode, and a credit rating downgraded to negative due to a significant shortfall in the Model 3 production rate.

Musk told his Tesla employees in a recent all-staff message to ignore what he described as a lot of fuss and noise in the media.