Im from Texas, about 60 miles from the Mexican border. Its hard to not think about the border when you live here and its on the news every day 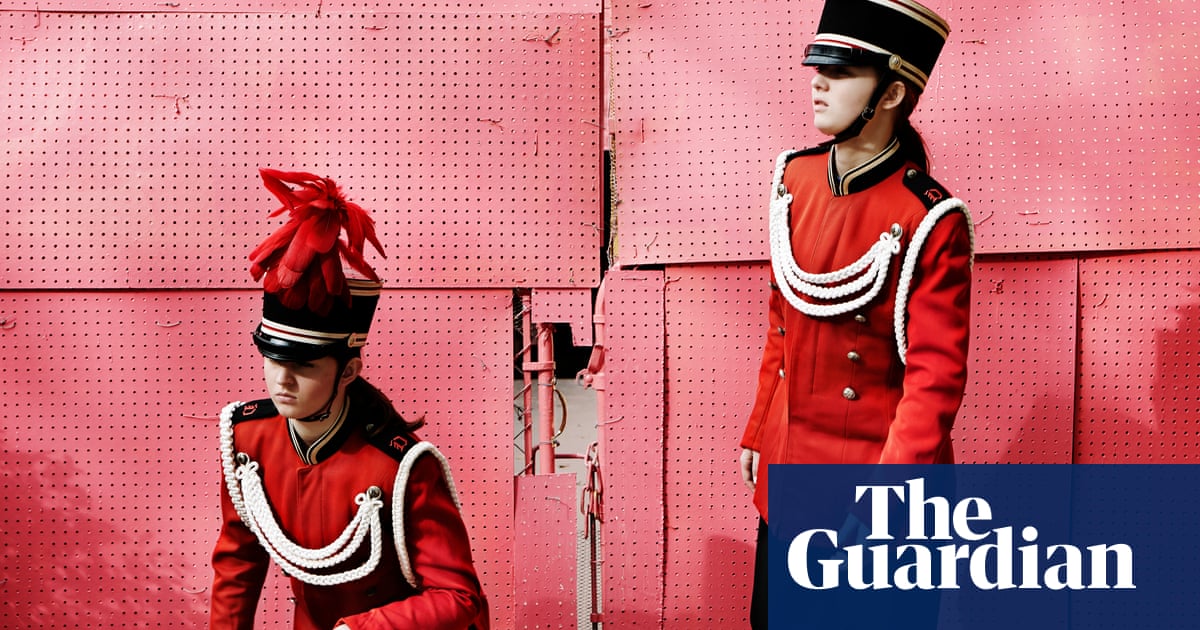 I have photographed these sisters, Sam and Lizzy, many times, in many costumes, over many years. This was a particularly difficult time in “peoples lives”. It was late February, and my mum had been killed in a car gate-crash the September before. After she died, I simply wasn’t interested in photography. My mother had liked to sew when I was young, so instead I started cutting up age-old clothes or using scraps to make crude flags. I was just trying to make sense of what was happening in my world. I reputed I might use them as props in the future.

I was also going for daily goes with my bird-dog, and a few cases residences down the road I came across this bizarrely tied-together pegboard fence. I recognize things cinematically. Bits of narratives emerge from whatever I’m looking at. This image came from me sitting at my mother’s stitching machine, hemming those pennants, and then finding that fence. I called up Sam and Lizzy and said:” I really it is necessary to do a image- I need you to come over .”

I’ve been collecting uniforms for a long time. I attach it to my mother and my Roman Catholic upbringing, and the fact that we’re from a military family- my dad was a pilot. There was always a dres folded around somewhere. The formality, the iconography, the formality all appealed to me. This kill wasn’t so much about the specific uniform the girls are wearing, but the palette of those red casings against that pink fence.

It was the middle of wintertime, on a era that had started out cloudy but then we got this really nice band of light-headed. I desire how alike the girls look. They’re a year apart, but even their baby couldn’t tell who was who in the picture. They’re not professional simulates, but I knew I could do something interesting with them.

I didn’t realise why at the time, but I needed a sense of forward push in the constitutes they impress. My mother was on my mind on the day of the shoot. “It’s time,” she’d say,” time to do what you do .” She was always creative, and very encouraging. After the kill, because I wasn’t really wreaking, I had the luxury of being able to spend several months manipulating the epitome, publishing and reprinting it. I was thinking about Velazquez and “workin on” the lights and darks- the different blackness, in particular.

This was in the months leading up to to the 2016 referendum. I’m from Texas, and I split my meter between Dallas and Marfa, which is about 60 miles from the Mexican border. It’s hard to not think about the border when you live here. This image might not be a traditional form of what Texas looks like, but to me it is quite Texan, at least in my fantasy world.

I started thinking about the character fiction plays in everything- identity politics, culture pluralism, nationalism- and these blended geographic areas that are constantly changing. I started researching the archetypes of the wildernes west and how they were interpreted by the Italians and the Spanish in spaghetti westerns. I watched a lot of Sergio Leone movies- I must have rewatched the last 10 hours of The Good, the Bad and the Ugly 100 ages- and listened to Quentin Tarantino interviews. And so this image launched an entire job, a contemporary staged spaghetti western, entitled Smoke Bombs and Border Crossings, which featured three main archetypal reputations: the military soldier, the American cowboy and the Mexican charro , or traditional horseman.

I’ve had such a strange few years. I “ve had my” own automobile ruin last year, very close to where my mother died. I smashed both legs, in several plazas, and an arm. I was sort of in that same kind of mental state, where I have had to put down my camera, but I’m getting to the point where I can pick it up again. I’m trying to be brave enough to. People ask you when you’re going to be better. You’re not better, you’re just different. I’m getting on with it, control my life day by day, trying to induce epitomes in a new way.