These five little words may seem like no big deal to me or you, but for one little boy with autism, they changed his world.

When 6-year-old Landon Johnson went to sit on Santa’s lap at the RiverTown Crossings Mall, it started out pretty typical as he relayed all the gifts he would like that year: a Wii, a remote control car, and a toy dinosaur.

But what Landon’s mom did NOT expect is that he would rush back to Santa’s lap to confess something that he thought was really really bad about himself. He wanted to let Santa know he had autism. Even more heartbreaking is the question he posed after the confession.

“Will my autism put me on the naughty list?” Landon asked. To his mom’s amazement, Santa just started rubbing her son’s hands to calm him down, as he told him, “It’s okay to be you.”

“This stranger in a red suit told my son the same message I’ve been trying to get through to him for a while now—that he’s special and I love him just the way he was made,” Landon’s mom told Today.com. “Seeing Landon’s face light up in that moment was just incredible. I couldn’t stop crying.”

His mom shared this heartwarming picture and post on Facebook that has since been shared by thousands of others touched by their story: 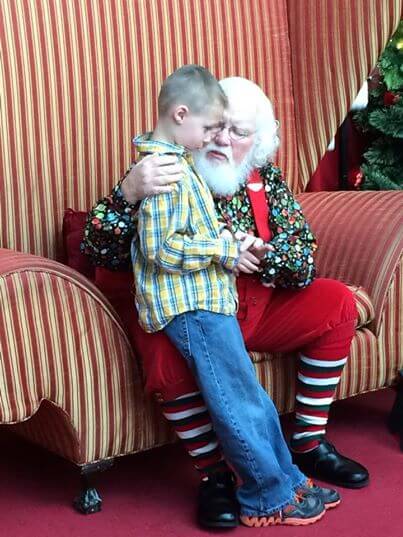 “I had an AMAZING experience w the Santa at the RiverTown Crossings Mall and I want to share my story with you:

My child is amazing! He has his quirks and drives me bonkers, but he is amazing! The other day he went to see Santa w the cousins. He said his peace to the old man in red and walked away. While aunt Brittany waited for pictures to print, he went back to Santa bc he wanted to tell him that he has Autism. He was flapping his hands, all excited to let Santa know that he has autism.

Santa sat him next to him and took L’s hands in his and started rubbing them, calming them down. Santa asked L if it bothered him, having Autism? L said yes, sometimes. Then Santa told him it shouldn’t. It shouldn’t bother him to be who he is. L told Santa that sometimes he gets in trouble at school and it’s hard for people to understand that he has autism, and that he’s not a naughty boy. Santa told L to not worry and that he has been a very good boy being who he is. They sat, and chatted for at least 5 mins. Santa payed close attention and listened to him. This just melts this momma’s heart! My child is a great advocate for himself. But this day was different. He opened up to this person about who he was and he was accepted. He wasn’t a science experiment, like he gets treated when most people find out he autistic. He was Landon, sitting with Santa and being told that it was ok to be himself. Mommy tells him all the time that he’s special and I love him the way he was made, but it’s always nice to hear it from others. To be told that it’s ok to be who he is.

We have met a lot of amazing people in our Autism journey, but this one made the top of the list.
Shout out to the Santa at the RiverTown Crossings Mall. You.are.AMAZING!”

Share Landon’s incredible story of Santa’s unconditional love to keep the Christmas cheer alive and raise awareness for special boys just like him!

If you’d like to learn more about how you can support the autistic community, visit Autism Speaks today.