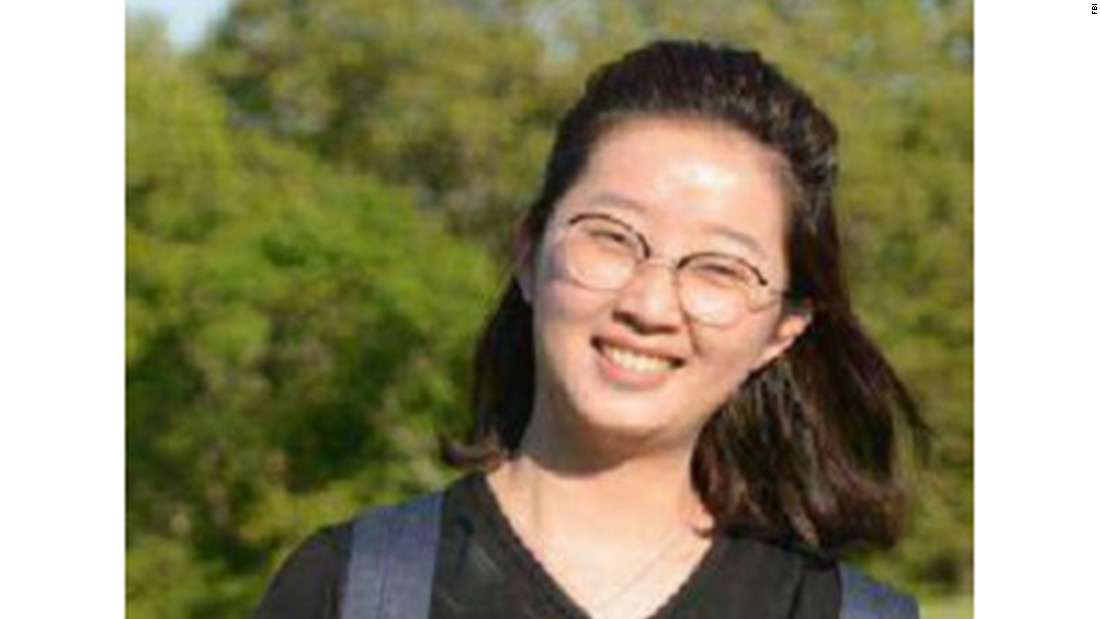 (CNN)Security camera video showed the visiting Chinese scholar getting into a black Saturn Astra hatchback on the University of Illinois campus the afternoon of June 9.

Since then, nobody has seen Yingying Zhang, 26.
On Tuesday the FBI announced it had found the Saturn, but would not say where it was or to whom the vehicle belonged. Few details have been released about the search since it began.
The FBI is treating the disappearance as a kidnapping, but the campus police, in an update on the case, say they are calling it a missing persons case.
“While we categorize this as a missing person case, the FBI may use different terminology to categorize its investigations, and kidnapping is one possibility of many that we are pursuing,” the web posting said. “At this point in the investigation, there is no way to confirm exactly what happened, and we are not ruling anything out.”
Zhang had a yearlong position at the university. The state’s flagship Urbana-Champaign campus has about 5,600 Chinese students enrolled, more than any other school in the United States, the Chicago Tribune says.
Zhang graduated last year with a master’s degree in environmental engineering from the Peking University Shenzhen Graduate School, the Tribune reported.
“She was about six weeks into her appointment as a scholar in the Department of Natural Resources and Environmental Sciences when she disappeared,” said school spokeswoman Robin Kaler.

She talked to driver

University police said Zhang had just gotten off a bus before the four-door hatchback approached her. Zhang can be seen standing by a tree as a black Saturn Astra pulls up next to her. She had a brief conversation with the driver before entering the vehicle.
The FBI says the vehicle appeared to be driven by a white male who circled the area before making contact with Zhang.
Zhang is 5-foot-4 and weighs 110 pounds, according to the FBI. She was last seen wearing a charcoal-colored baseball cap, a pink and white top, jeans and white tennis shoes. She carried a black backpack.

Police have begged for patience from concerned students.
“We realize that this has been a source of anxiety for our entire campus community,” campus Police Chief Jeff Christensen said in a message to the town. “Our concern for Yingying grows with each day that passes. … While we cannot share specific details on the investigation in order to maintain its integrity and direction, we continue to make progress in our search, and we will not give up until we find her.”
Police say they are searching security camera footage, local hospitals, working with rideshare programs like Uber and Lyft, and checking other records.
Zhang’s father, Ronggao Zhang, traveled from Nanping, China, to do what he could to help find his daughter, the Tribune reported.
The Chinese Students and Scholars Association plans to hold a walk and concert Thursday to show their concern for Zhang, reported the student paper, The Daily Illini.

Zhang’s family has teamed up with Champaign County Crime Stoppers to offer a $40,000 reward for information leading to an arrest in her disappearance.
“This is the largest award Crime Stoppers has ever granted since our inception,” said Champaign County Crime Stoppers President John Hecker.
“We’ve been in the business, if you will, for more than 30 years. And I think that underscores the importance of how we are looking upon this particular case.”
The FBI is also offering a $10,000 reward for information leading to the location of the missing woman.
The University of Illinois Community Credit Union started a GoFundMe campaign with a goal of $30,000. The campaign’s purpose is to provide aid to the Zhang family to cover expenses as the search continues. The campaign had raised over $72,000 by Tuesday morning.