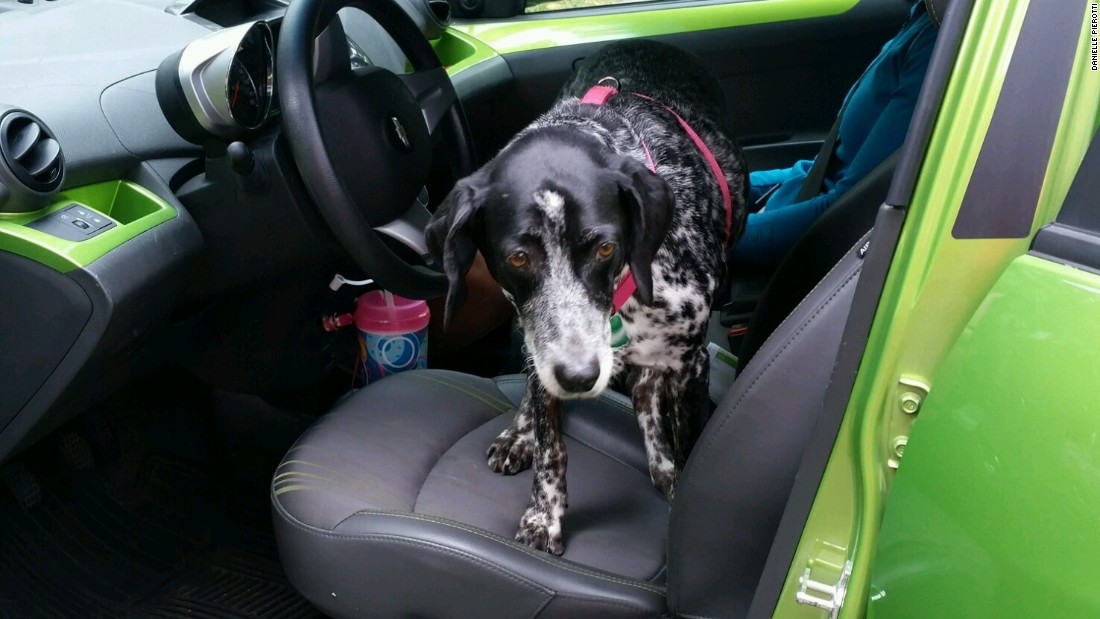 Alexandria (CNN)When gunshots pierced the still of a sunny Wednesday morning in Alexandria, Va., Katie Filous hit the ground with her four dogs.

She had just arrived at Eugene Simpson Stadium Park when James Hodgkinson, an Illinois man who’d been living nearby out of his car, fired his rifle toward a group of Republican congressmen practicing in the field for an annual baseball game.
“One of the players ran over and started screaming, ‘There’s a guy with a rifle! Everyone needs to get down!'” Filous recalled.
Filous pulled the dogs close to her. Crystal Griner, a Capitol Police special agent, leaped from a nearby SUV and started shouting and shooting back at Hodgkinson.
The dogs were “freaking out,” and she was terrified, Filous said.
“I took that moment to decide that I had to crawl on my stomach and drag the dogs with me to the sidewalk,” Filous said.
That’s when Daphane, an 11-year-old German Shorthaired Pointer rescue that Filous regularly dog-sits, took off running.
Filous and the other dogs reached the parking lot and huddled beneath a car for minutes before a man in a suit and sunglasses directed them to safety. As they took cover behind him, Filous remembers shouting — “one of my dogs ran away! We have to get her! We have to find her!”
The hours that followed were harrowing.
Details of the attack started to emerge: Republican Whip Steve Scalise had been severely injured along with four others. The gunman was identified as a 66-year-old leftist. And Daphane was nowhere to be found.
“I couldn’t stop crying,” Filous, 29, said. “It felt like a family member was missing.”
Filous and her husband took to social media to help. Missing posters spread online, garnering thousands of views. Members from across the community, a quiet, family-friendly suburb of DC, joined in on the search.
“We roved for hours and hours and hours. We ran through the woods. We ran through people’s backyards,” Filous said.
At 1:30 a.m., nearly 19 hours later and two miles away from the park, an Alexandria Police officer found Daphane, timid and thirsty.
Filous, a full-time attorney, was at the Animal Welfare League of Alexandria to pick her up first thing Thursday morning. It was “a total miracle.”
“She kind of walked by us and I said ‘Daphane?’ and she stopped, and her whole body started shaking, and she ran over to me, and I hugged and her we sat like that for a while,” Filous said. “I was so relieved.”
Later that day, Daphane was back with her owner, who had returned home to a city very different than the one she left only days before on business.
“I’m quite overwhelmed and humbled by the amount of interest and concern and effort that total strangers went into finding one missing dog,” said owner Danielle Pierotti, 46, with a tired but happy Daphane standing beside her.
“I really think that what it says is that we as human beings want to care about each other and we want to be connected,” Pierotti said. “We’re searching for ways in this really divisive and complicated world that when we can find something we agree with — like a lost dog — people are eager to do that.”